One of the best aspects of retirement for me is the opportunity it affords to catch up with or to revisit outstanding TV series, either from my DVD/Blu-ray collection or video streaming services. Watching something several years after its debut allows one to appreciate its significance as part of television history, to read critical commentary around it and to compare it to contemporary production. I’m no great binge-watcher, especially of great drama – I find that the impact of the best material demands time to sink in, so I rarely watch more than two episodes at any sitting. I also like to leave a period of time between seasons, as would happen if I was watching it on debut, rather than jump straight in to the next season when I come to the end of one. As a result, the process can take some time and, of course, I am catching up with other things, movies and TV, at the same time.

One of the series at the top of my list to see in full was Deadwood (HBO), David Milch’s ground-breaking western series which ran for three seasons between 2004 and 2006. There were several reasons for this: firstly I had heard from so many people whose opinions I value that it was one of the best, if not the best TV drama of all (including former Peabody Director Horace Newcomb, who rated it his number one) as well as reading similar judgement in books by David Bianculli and Sepinwall & Seitz; then there was the pedigree of work by David Milch, co-creator of NYPD Blue (ABC, 1993-2005) – one of my all-time favourites (I never missed an episode and intend to revisit it all some time); and there was the tantalising prospect that concluding episodes may yet be made, which, at the time of writing, remains just that (though the chance of it happening is far from certain and the recent sad death of Powers Boothe can’t have helped). I had picked up a set of the complete three seasons for under a tenner in an Amazon sale, so was set to go.

Good TV westerns are now a great rarity, though they dominated both the peak-time and 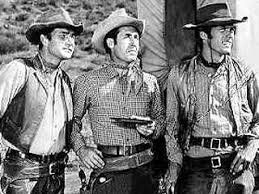 children’s schedules (and my own viewing) when I first started watching TV in the late 1950s. ITV had just begun and imported a large number of American titles, with the BBC following suit to compete. My particular favourites were The Lone Ranger (ABC, 1949-57), Wagon Train (NBC, 1957-62), Maverick (ABC, 1957-62), Bonanza (NBC, 1959-73) and, above all, Rawhide (CBS, 1959-65). However, the genre all but disappeared from TV (and, indeed, the cinema) from the late sixties onwards. There were many reasons for this – socio-political, cultural and economic – though there were the occasional revivals in both cinema (mostly thanks to former TV cowboy Clint Eastwood) and TV (1989’s Lonesome Dove), but then nothing of real impact until….

Deadwood does not just make an impact as a western, but as a wonderful piece of drama which just happens to be a western. It is recognisably the work of one of the co-creators of NYPD Blue, with which it shares a number of characteristics: a strong sense of location; episodes which follow a number of strongly-drawn characters over the course of a day and advances multiple plot lines in brief and telling scenes; a reprehensible anti-hero who is the most memorable (and most memorably portrayed) character in the show, as well as the spirit of the piece. What sets Deadwood apart from other dramas is its use of language: not that it is authentic to the period, but that it creates the illusion that it may be. It is actually poetic, quasi Shakespearean in places, as well as being full of the highest “naughty words” quotient in TV drama history. Characters often speak aloud to themselves, in what amount to soliloquies, without it seeming unnatural. Master of this style is William Sanderson as the scheming town mayor and hotelier E.B.Farnum, whose awareness of his own failings is beautifully and movingly expressed.

Of course, the main focus is Ian McShane’s magnetic performance as saloon-owner and general “Mr Big” Al Swearengen – a name that seems too perfect, given his responsibility 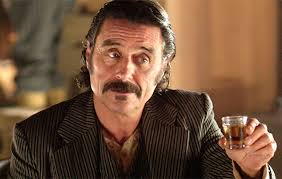 for so much of the f-ing and c-ing in the dialogue, but one which belonged to the real-life individual on whom the character is based. Indeed, most of the characters in Deadwood are based on the town’s original inhabitants and the narrative is closely tied to the historical reality and to examining the development of social, political and economic structures which emerged from the anarchy of the pioneering west; and within this narrative, Milch and his terrific cast create characters who have both a historic and contemporary resonance, which is why it works so well.

Much has been written about the abrupt ending of Deadwood, following the incredibly tense third and final season, and the possibility of a coda being made, but it was certainly, yet again, not part of a western revival. It seems that the reappearance of westerns are now one-offs rather than fixtures in the TV and movie landscape. In 2012 we got Hatfields and McCoys (History Channel), which also featured a notable attempt at historical reconstruction, including authentic-sounding dialogue, but we have had nothing to rank alongside Deadwood until….

Godless (Netflix, 2017), written and directed by Scott Frank, does have certain themes and plot points in common with Deadwood: from the growth of capitalist interest in the

activities of the mineral pioneers, through the importance of the press in the development of the west and its mythology to the depiction of lesbian relationships. However, having watched it immediately after finishing Deadwood, its differences are more striking: it has much more in the way of open spaces, whereas Deadwood is almost completely confined to the town, which gives it a claustrophobic feel (rather like that of NYPD Blue); it also has more in the way of traditional western tropes (the “cowardly” sheriff redeemed at the end; the mysterious stranger who acts as a mentor to a young boy, before riding off into the sunset; a climactic shootout worthy of Sam Peckinpah) despite the “twist” that it features a large number of female protagonists; basically it looks like an extended movie rather than a TV series (shot in a 2.39:1 ratio; complete at just over 7 hours, or less than twice the running time of Heaven’s Gate). It is also mightily impressive and enjoyable and a significant addition to the western canon on both film and TV.

And with the highly-regarded Hostiles yet to come, anybody would think another western revival was underway. As on previous occasions, it probably isn’t, but I’m already looking forward to the next time we think it may be.