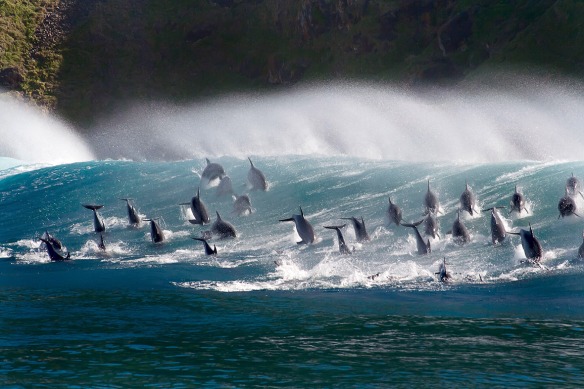 An eel diving into a lake at the bottom of the ocean? A fish with a bulbous transparent forehead so that it can see upwards and backwards? You’ve got to be kidding me, right? No – just two of the many startling sights from the latest edition of Blue Planet II (BBC1, Sundays), delivered from the deepest blue ocean to our bonfire-night living rooms in close-up and glorious high-definition. Oh, and just for good measure, as well as showing us deep-sea creatures which looked like something out of Doctor Who or an advert for cooking with gas, this awe-inspiring hour of television hinted at the origins of life itself and the possibility of it existing elsewhere in our own solar system. This was the second 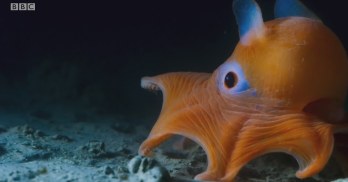 in the series and the first was pretty spectacular, too – some of the shots of waves were as wonderful as those of the creatures under them and the surfing dolphins were brilliant.

Just as with Planet Earth II last year, and Life Story before that, we are getting the most spectacular new wildlife footage possible, shot using the latest equipment and techniques, the most significant of which is the use of small, resilient, remotely-controlled cameras. Digital technology allows the time and patience required to achieve the best shots, without the need to waste expensive film stock or the equally expensive time of the cameraman in the process.

The other thing which has changed is how natural history programmes and series are put together. The familiar, reassuring presence of Sir David Attenborough is the only remaining link with what has gone before. Just as the speed of light is the only constant 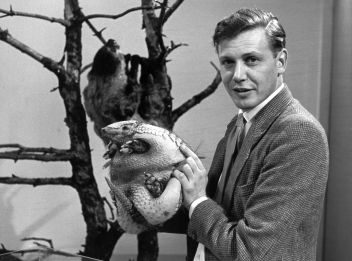 in an expanding universe, so the presence of Sir David is the one thing you can rely on in the changing universe of TV natural history. I had the enormous privilege of working with him on a talk he gave as part of our TV documentary season at the BFI two years ago, in which, using the clips we researched and selected, he traced the development of the techniques of natural history programming from the earliest, studio-bound primitivism of the early 1950s to the filming of the landmark series Life on Earth (BBC, 1979), nearly all of which he had led or been personally involved in. His wonderful talk can still be seen on the BFI website here.

Life on Earth was the high watermark of natural history series in terms of both the quality of its images and the scope of its ambition: to explain the evolution of species in 13 parts. He followed this with a succession of brilliant variations on the theme, all designed to explore aspects of the natural world in more detail and all containing the trademark word “life” in the title: The Trials of Life (1990), Life in the Freezer (1993), The Life of Birds (1998), The Private Life of Plants (1995) etc. Each one showcased even more spectacular advances in wildlife filming than its predecessor and, as widescreen 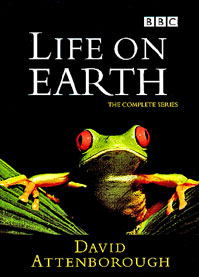 and high-definition television systems arrived, so the familiar stories were re-told in higher quality, interspersed with whatever new animal behaviours had been found in the process.

Where, previously, footage had been sought to illustrate a chosen thesis, more recently it seems that each series is designed to showcase whatever spectacular footage has been obtained. Hence the “movie sequel” titling of series like Planet Earth II and Blue Planet II. Now into his 90s, but miraculously still as vital and engaged as ever, Attenborough’s contribution is confined to an introductory piece to camera in the first episode of a series and a concluding one at the end of the last, plus, of course, reading the narration, which he no longer writes, though he does insist on having the final say on its contents. The last major thing Attenborough did which had a proper thesis was The Rise of the Animals in 2013 and that was actually an updating of Life on Earth, using state-of-the-art high definition graphics and revealing the results of the latest dinosaur excavations, which the then 87-year-old presenter climbed up a Chinese mountain to investigate. After a long lifetime of intrepid and memorable location work, he has certainly earned his place of comfort in the narrator’s chair.

But there are also fewer words now. The key element of the natural history programme today is music and the building blocks of each programme are self-contained sequences, usually containing dramatic confrontations between species. These are clearly designed as much to stand alone on video sharing and social media platforms as to constitute part of a programme and they often look like music videos. And the composers have been recruited from the worlds of TV drama and the movies: firstly Murray Gold, whose dramatic scores are such an integral part of Doctor Who; and more recently the renowned and prolific Hans Zimmer, the most relevant of whose numerous credits are probably Gladiator (for the animal “battle” scenes) and The Lion King (obviously!).

The music certainly makes the sequences highly dramatic and, because the style is associated with fiction and conveys emotions through association, could even be accused of having an anthropomorphic effect. It can also be used to provide sound effects where they do not otherwise exist, such as underwater. Some fish look very frightening, but they don’t roar, though music can suggest that they may be doing something similarly menacing. The letters page of the current Radio Times is full of predictable complaints about the use of music in Blue Planet II, but, for me, it has contributed massively to some fantastic sequences: one thinks of the barnacle goslings leaping from the cliff in Life Story, grippingly scored by Murray Gold and embedded here (though only in part – the whole sequence lasts about 10 minutes and is well worth checking out); and, of course, the iguana hatchlings escaping the marauding snakes in Planet Earth II. And, for humour, the flamenco dancing spider in Life Story is hard to beat.

One other recent development is also worth noting – the ten-minute “making of” sections at the end of each programme, which provide transparency where there may previously have been distrust as to how the programme makers may be manipulating their footage (remember the polar bear cub?). But, if you look back at the clips selected by Sir David Attenborough for his talk at the BFI, you will find that the most significant milestones in the development of natural history programming were similarly up-front about how the filming was done. The evolution of natural history programming on TV is, after all, a great story in its own right.

5 thoughts on “Planets and (TV) Universes”