he time for all those “best of the year” lists, which are fun and cause discussion and serve as an interesting snapshot of contemporary judgement for posterity, much as awards do. I read as many as I can, both TV and film, and one of the ones I always look at is Sight and Sound’s best films of the year. Being a poll of eminent critics from around the world, much as their “best films ever” list is every decade, it carries more weight than most and this year it caused a stir by actively soliciting TV (and other moving image) choices for the first time. Or, rather, it was the result which caused the stir. TV titles had appeared in the list before: three years ago, Bruno Dumont’s P’tit Quinquin, a four-part TV series which also showed at film festivals, was included, but was easily “explained away” because of those festival outings and because it didn’t finish high enough to be particularly impactful.

Of course, all the fuss surrounding this year’s list was focussed on Twin Peaks, which came second in the 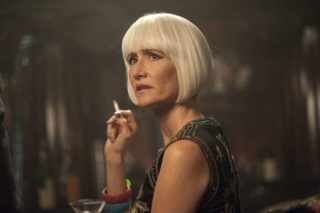 poll, as though this somehow represents a fatal point of no return for the primacy of cinema to those who believe in such a thing. Maybe it does, though it is a very thin end of the wedge so far – I can think of several more TV series which are superior to many of the traditional films on the list. What is more, of all the TV series on offer, Twin Peaks best fits the profile of what a film critic would find acceptable – not only did David Lynch say that he saw it as a long film cut up into parts, but he directed it all himself (unlike the 1990-1 series). And never mind that the film which topped the poll was the “big screen” directorial debut of a TV comedy star (not mentioned in the lengthy and otherwise excellent essay in S&S) – far more subversive is the presence of the other TV drama series in the top 40, The Handmaid’s Tale, way down at the bottom. Titles on the list are all followed (traditionally) by the director’s name, but The Handmaid’s Tale is credited to Bruce Miller, who is the “show runner” and wrote many of the episodes, but didn’t direct any of it. This acknowledgement of the validity of a different way of doing things, if it is such, is a big step.

It is often said that major film directors are moving into TV because of the increased scope for exploring interesting stories, but I think the change in the shape of the screen and definition of the image was equally, if not more, important. However, even before these changes happened, back in the 20th century, there were plenty of great directors besides Lynch happy to work in “small screen” television forms, or to make both film and TV versions of some of their work. Prominent amongst these was Ingmar Bergman, who made TV versions of Scenes from a Marriage, Face to Face and Fanny and 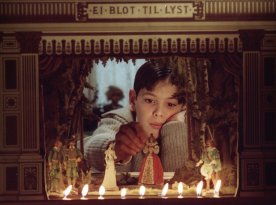 Alexander (the first part of which, incidentally, has to be the greatest Christmas movie of all). Indeed, the feature versions of the first two were simply cut down versions of the TV series. In Germany, Rainer Werner Fassbinder was prolific in television – not just the celebrated Berlin Alexanderplatz, but also the “family series” Eight Hours Don’t Make a Day (which I have only just caught up with, thanks to the Arrow release) and World on a Wire. I first saw Berlin Alexanderplatz at an exhausting but exhilarating all-weekend screening in NFT1, and Edgar Reitz’s Heimat, which for me is the greatest TV drama series of all, was also first available as an even more memorable two-day cinema marathon.

Even more instructive is the case of Krzysztof Kieslowski’s Dekalog, a series of ten television dramas, two of which the director expanded from the TV length of about an hour, to a feature length of nearer 90 minutes for cinema release. I find the cinema version of A Short Film About Love better than the TV segment, as it allows for greater characterisation, but I prefer the TV version of what became A Short

Film About Killing because it is much starker and more focussed, with the extra material in the cinema version consisting of unnecessary exposition and moralising. My point here is that my judgement, whether you agree with it or not, is based solely on the different structures of the two versions, not, as is usual when comparing film and TV, on different screen ratios or film gauges or the difference between the theatrical and the home viewing experience.

So, it’s not the film makers themselves who have maintained this “superiority of cinema” ethos – it’s the critics. Film critics have been refining their craft within a comfortable bubble for a long time now – they have a restricted and well-delineated output to consider and, though they love nothing better than a good argument, they conduct their discussions through a common language and an accepted approach to their subject. They meet each other at screenings and festivals, so it is something of a club. TV criticism, by comparison has been fragmented and often even hostile to the medium. You cannot imagine a newspaper or journal employing a film critic who does not love film, but there have been plenty of TV critics who have looked askance at the medium or who have followed their proprietor’s interests in attacking the established broadcasters, especially in the Murdoch press. The likes of Peter Fiddick and Christopher Dunkley always gave TV the serious consideration it deserved, but there were plenty who didn’t and the lack of a TV equivalent of Sight and Sound added to the feeling that it was the inferior form. That things are changing now is mainly down to online platforms. Whereas previously a TV critic would review the first episode of a series only, to coincide with its transmission, nowadays each episode of a significant series will receive critical scrutiny, which leads to more considered judgements.

The technology for creating the images for film and TV has converged – no more film vs digital or 16mm vs 35/70mm, it’s all however many Ks now. Home reception and reproduction technologies have gone through a similar revolution – there are bigger TV screens now than some of the cinema screens I have encountered, as well as home digital projection. Screening in a theatre will become an even less common experience. I remember a TV interview with David Puttnam, just after VHS came out, in which he predicted that cinema will simply become a showcase to promote the home video industry – it’s taken some time, but he was right. Netflix now makes many films for its subscription service only, a

move which caused controversy at this year’s Cannes Film Festival. So, what we need now is a convergence of critical response and hopefully the Sight and Sound poll will come to be seen as one small step on the way.

But if directorial authorship is no longer a sine qua non, and if the advantages of long-form television drama are clear (some film franchises are similar anyway), there is still one aspect of television production which may continue to be a difficult hurdle for the film critic to jump if critical convergence is to be possible, and that is the question of programme duration. A two-tier system already exists within the various structures of film assessment: anything running less than 40 minutes is a “short film” and has a separate category at awards ceremonies, though no separate mechanism for judging, say, the acting performances or music such films contain, even though they may be more impressive than those in features. They also get excluded from critical film lists – I’m constantly frustrated when I see Laurel and

Hardy represented in such lists by Sons of the Desert or Way Out West rather than one of the true masterpieces from their catalogue of shorts. As far as I am concerned, there is a right length for everything and, if that is under 40 minutes, so be it. Comedy is a case in point: 30 to 40 minutes, or less, is best for comedy because you can only laugh so much without the effect beginning to wear off. Padding comedy out to feature length by adding musical numbers or romantic sub-plots undermines the structure of the piece.

TV used to operate similar conventions: 50-60 minutes or more for drama (and documentary); 25-30 minutes for comedy (and current affairs). But in the last dozen or so years there has been a burst of

creativity in the 30-minute form, coming out of comedy, but containing reflective or dramatic elements, which has been responsible for many of the very best titles on offer. If I was to list my top ten TV titles of this century, it would include The Thick of It, Sensitive Skin, Getting On and Him and Her. Recent outstanding work from the USA includes Transparent, Girls, Master of None and One Mississippi. These series can have similar plot arcs to drama, rather than simply being episodic, and should be judged on the same terms. There is no extra merit in length – succinctness can be the greater skill. This is recognised in the end of year lists of best TV, but it is interesting that the TV titles in the Sight and Sound list are only those where the episodes are of feature length. But I mustn’t grumble – it’s a start.

All of which serves as a trailer for my own TV Top Ten list, which I will post before the end of the year. I am leaving it to the last minute so that I can include anything great that may go out between now and then – the Radio Times indicates one or two promising possibilities over the holiday period. And, yes, it will be a list of TV titles only, which I hope is not hypocritical of me in the light of what I have written above – it is really just a recognition of probably the greatest barrier to full critical convergence, which is the sheer volume of the material to consider.

So, in the meantime have a very Happy Christmas – I hope you see something wonderful.

3 thoughts on “Films didn’t get small – TV got big”