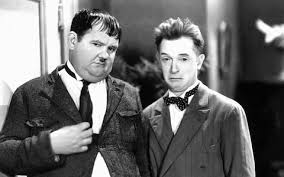 The recent release of the film Stan and Ollie and the associated revival of interest in the films of Laurel and Hardy, always great favourites of mine since childhood and a constant joy to revisit (especially in the company of my daughter, Hanna), has got me thinking once again about a pet theory of mine: which is, basically, that Stan Laurel, whom I regard as the greatest comic genius of the 20thcentury, laid the foundations of television sitcom in the sound film shorts he made with Oliver Hardy between 1929 and 1935.

The first TV sitcom was on the BBC; Pinwright’s Progress (1946/7), though it is during the fifties that the major pioneering titles appeared: I Love Lucy and The Phil Silvers

Show in the USA; Hancock’s Half Hour in Britain. When the origins of the form are traced back beyond the start of the television era, the usual medium cited is radio, quite naturally as it is also a broadcasting medium. Numerous titles which became significant television sitcoms originated in radio and, in the US, the form can be traced back to the 1920s. For example, the notorious Amos ‘n’ Andy originated on radio in 1928, before being produced for television (interestingly enough, at the Hal Roach Studios) in the fifties. As the earliest sitcoms were performed for a studio audience, theatre, especially music hall, can also be regarded as an influence, but film is rarely considered, other than for the impact of one comedian’s work on another’s (and Stan and Ollie are regularly cited in this regard). However, I can see many things which became essential elements of television sitcom in the Laurel and Hardy shorts of the early thirties. 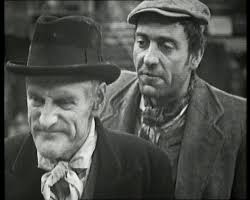 65, 1970-74) is an interdependent father/son relationship in which the son feels trapped. It is not the rag and bone business – there are plenty of episodes in which that business plays no part whatsoever in the narrative. Throughout their short films, Stan Laurel and Oliver Hardy played highly recognisable and consistent characters and they developed depth to those characters as they continued to play them, much as happens in a successful long-running sitcom.

Duration is also an important element of sitcom, with 25-30 minutes seen as the optimum length for fitting in as many laughs as possible without wearing out the audience. The Laurel and Hardy two-reel comedies mirror that optimum length precisely. What’s more, they are often structured to end the first reel on a scene change (in case the venue only has one projector), which also reflects the structure of those sitcoms designed to incorporate advertising breaks. It is no surprise that the short films were so frequently on television in the sixties and seventies.

Other standard sitcom tropes can be traced back to Stan and Ollie, not least the familiar and regularly repeated catchphrases (“Well, here’s another nice mess…/well, it wasn’t my fault”; “Why don’t you do something to help me?”) or routines (Stan comes up with a good idea – Ollie asks him to repeat it – Stan fails miserably to replicate what he had said). Although not shot in front of an audience, the presence of a movie theatre 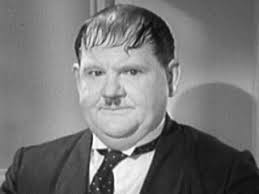 audience is also acknowledged in Ollie’s looks into the camera. And two male leads is very common in sitcom, particularly on British TV, which prefers its comedy characters to be losers & failures, rather than the wisecracking types more prevalent in the US – echoes of Laurel and Hardy can be found in the partnerships of Tony Hancock and Sid James, Steptoe and Son, The Likely Lads and more.

So far, so good, but, of course, there are flaws to this theory. The most obvious are that the Laurel and Hardy films are each made to stand alone, not to be seen as part of a series, not made in any sort of “order” and feature the characters in a variety of “situations”. However, it is only relatively recently that TV sitcoms have developed narrative continuity – most of the episodes of traditional sitcoms can stand alone. What’s more, it is possible to carry out an exercise of “ordering” on the Laurel and Hardy shorts, which I do purely for fun, but it does strengthen my claim that the shorts can be seen as an early form of sitcom. With one exception, the 38 full-sound shorts can be divided into 4 basic “situations” and it is not difficult to see how a progression could be made from one to the next, forming different “seasons” of the developing Stan & Ollie characters. 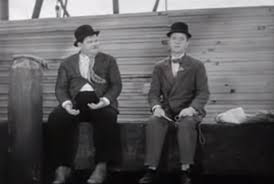 In the second “situation”, our heroes are more settled – they have somewhere to live and are often seen in a variety of different jobs, though they invariably end up making a 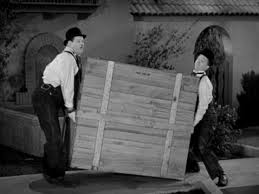 Domesticity takes over in the third “situation” – Ollie is either married or engaged to be married – Stan is the best friend who is a bad influence and disrupts the harmony of the relationship. This is the same basic plot as Whatever Happened to the Likely Lads

of Be Big and regarded as probably the best of their longer films, also fits here (another “special”?). In Brats, Laurel and Hardy play their own children (the final development?) and in Twice Two, their own sisters (and each other’s wives). A further flaw to my theory is that, in both the final two situations, the actresses playing the wives differ from film to film, but similar cast changes are not unknown in sitcom and don’t forget that in real life Oliver Hardy was married three times, while Stan Laurel was married at various times to four different women, one of them twice!

The only sound short which doesn’t fit into any of the four “situations” is Blotto (1930), in which Stan is married and Ollie is the disruptive friend. This was an early effort, though, and doesn’t really work – they obviously concluded that it worked better if Stan played the disruptive one. Blotto is the exception which proves the rule. Having established their characters’ rules in any of the “situations” for the contemporary movie audience, Stan and Ollie could exploit their familiarity as a shortcut to the laughs. 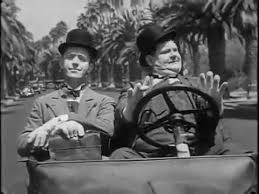 Make no mistake, the sound shorts are Laurel and Hardy’s masterpieces. Like most television sitcoms and sketch shows, they are just the right length for comedy. While there are some great scenes in the features, the films themselves are often padded out with musical numbers or romantic sub-plots which detract from the purity and the structure of the comedy. The main reason Laurel and Hardy made the best, the most successful and the most influential sound shorts is that they were the only ones of the silent comedians to exploit the change to sound with brilliant dialogue and characterisation, while retaining the structure of their comedy form, something neither Chaplin nor Keaton were able or willing to do, while those who came to prominence later – Abbott and Costello, the Marx Brothers – concentrated on feature-length films. So, the short films of Laurel and Hardy remain the original gold standard of the form and a clear inspiration for those who later came to make comedy at the same length.

Anyway, that’s my story and I’m stuck with it.