Having had to self-isolate in my converted attic for a few weeks, my TV viewing has been mainly conducted through streaming services, via my i-Mac (with 5-speaker sound system). Perfect conditions to catch up with things – if only there was something new worth watching? In my last blog I was bemoaning the fact that I had only managed to find two things for my year’s shortlist in the first quarter of the year – and with production effectively halted, which will have a knock-on effect later in the year, it was looking as though I may even struggle to complete a top ten at all.

But then, along comes a bona fide masterpiece, seemingly out of nowhere, to lift the gloom and restore faith. Tales from the Loop (Amazon) is difficult to describe in genre terms – I guess I would call it a slow, meditative retro sci-fi linked anthology. It has antecedents but it is not necessarily helpful to invoke them, though I will, simply in order to give reference points. The small town with a mysterious research institute, plus the retro setting and focus on children and teenagers will inevitably invite comparison with Stranger Things (Netflix), but there the comparison ends. The moral and philosophical questions raised by the unexpected effects of strange technologies recalls Black Mirror (Netflix). The general atmosphere of loss and regret and the meditative musicality reminded me in parts of my great favourite The Leftovers (HBO). 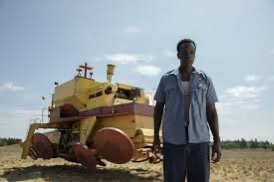 But it is very much its own highly distinctive thing, which is what makes it so great. It is based on books by the Swedish painter Simon Stalenhag, but the paintings are merely

starting points and the stories, characters and setting are, as far as I can see, all down to writer/creator Nathaniel Halpern. Halpern has the great gift of being able to establish a character in a minimal time frame (much as Jimmy McGovern does in The Street and Accused) and this is vital to the structure of the series, which consists of 8 episodes, each of which tells a separate story, though they are linked by the location, the relationships of the characters and the presence of The Loop (the research facility built to unlock and explore the mysteries of the universe). Characters glimpsed briefly in early episodes return at the centre of their own stories as the series proceeds. The characters who return most often are The Loop’s founder, Russ (Jonathan Pryce), his daughter-in-law Loretta (Rebecca Hall), who takes his position later in the series and her young son Cole (Duncan Joiner), through whose eyes much of the mystery is seen. 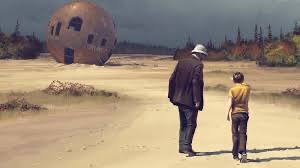 Most of the episodes ask a question – what if you met your younger/older self?; what if you could swap bodies with a friend?; what if you could freeze time for everybody except yourself? – and explore the consequences of the characters’ reactions in full detail. It is the presentation of the stories which really counts, though. The pacing is very

slow, so that all the implications of what we are seeing sink in. The cinematography is very beautiful and there is a Malick-style focus on the natural world and the placing of characters in landscapes. Music is very important – it is by Philip Glass (who you know well is one of my very favourites) and Paul Leonard-Morgan and both their contributions are perfectly integrated and affecting. In keeping with, and contributing to the mood of the piece, the music is slow and beautiful.

Ok, so this is clearly something which appeals to my personal taste and sensibility. Some critics have inevitably complained that it is too slow or that “nothing happens” (which is untrue – it just doesn’t happen very quickly). Such people are best ignored – they probably don’t like Terrence Malick movies either.

For me, it is a marvel. What’s more, I simply can’t choose favourite episodes – each one is perfect and of equal quality to the others. They resonate in the imagination long after they have finished. Characters left in limbo are revisited (though not all of them) and the ending rounds off the series beautifully and in similar fashion to the way it started. I really hope there is no attempt at a second season, much as I could watch it endlessly, because I can’t see this being improved upon. Tales from the Loop is not just one for the shortlist – it is probably the year’s best and will be in my decade’s best, if I last that long.

If Tales from the Loop was an unanticipated revelation, Quiz, which finished on ITV last night, was possibly the most predictably entertaining thing of the year so far. It had

everything you could want: direction by Stephen Frears, again tackling in a three-part TV series the sort of real-life drama he has excelled at so many times; a terrific story – the attempt to defraud (or maybe not?) the mega hit quiz show of the turn of the century, Who Wants to be a Millionaire? (ITV); a brilliant cast, headed by Matthew MacFadyen and Sian Clifford and including another spot-on cameo from Michael Sheen as Chris Tarrant. Like the programme it depicted, it was cleverly “stripped” across three nights and was unmissable. And, of course, it delivered in spades. Whether that makes it a candidate for the shortlist, I’m not fully convinced, but, as the list is so short right now, it’s going in anyway. At the end of the day, there is no such thing as a sure-fire success and, even though this is about the nearest you could get to that, it is still a terrific achievement. So, we are up to 4!

Apart from that, much of my recent viewing (and listening) has involved online music platforms, many of which threw themselves open freely to the public during the current crisis. One of the first to do so was the Berlin Philharmonic’s Digital Concert Hall, to which I was already a subscriber (thanks to a generous Christmas gift from my wife). It is 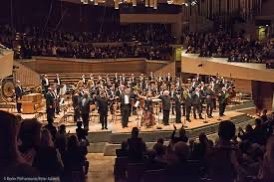 a magnificent resource and the concerts are beautifully presented visually – so much so that you really feel you are getting to know the individual instrumentalists and making it something that must be watched as well as listened to (though I often do listen while composing this blog). I also took in the complete Vienna State Opera Ring cycle (fine performances – lousy production) and, over the Easter weekend, an excellent stadium-style production of Jesus Christ Superstar.

With our extra reliance on digital audio-visual culture, one question many are asking is whether the lockdown will produce any interesting new TV or digital forms. So far, we have only had socially distanced versions of discussion, panel and chat shows. Whether anything may emerge in the genres of comedy or drama which takes account of the restricted production methods currently in operation is doubtful, but, if it did happen, it could be highly innovative and influential. The longer this goes on the more likely such things are to emerge. And if there is a big shift in production culture as a result, something like Tales from the Loop may end up as one of the last of the “traditional” masterpieces. Again, this is highly unlikely, but it would certainly be a worthy swansong for a phenomenal TV era.