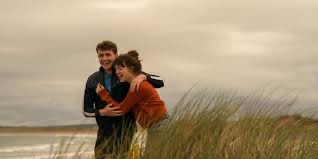 You’d have thought that lockdown would have given me plenty of opportunity to write more blogs, but it is well over a month since my last – not because I have not found plenty to think about, but because I have needed to wait for an appropriate moment to reflect on the current TV landscape and to complete viewing a few series which are vying for places on my (now) increasing shortlist, as well as to consider some of the more remarkable results of production under the restrictions of social distancing. So, there’s a lot to catch up on.

Clearly, there were plenty of series already made before the imposition of restrictions which have been released recently, though the broadcasters are wisely spreading them more thinly than usual to make them last until production can return to something approaching normality. These are “normal” programmes (the first of three categories to consider) and where better to start with them than the biggest hit of the last weeks, the appropriately titled Normal People (BBC3 on BBC1).

I actually watched it on BBC1 because I wanted to experience the episodes as a regularly transmitted weekly treat, rather than devour them all at once. This was a good choice, because Normal People actually came across as something of a throwback rather than a modern piece of drama. Its virtues were traditional – a gently unfolding love story;

brilliantly acted and directed; dialogue which seemed highly conventional rather than being idiomatic of “today’s young people”; lovingly photographed Irish rural landscapes and Dublin vistas. It also allowed a chance to compare the styles of the two excellent directors who realised it – Lenny Abrahamson for the first six episodes and Hettie Macdonald for the remaining six. Would it be a case of the male vs the female gaze? Abrahamson’s approach seemed the more restrained – the pace was slower and the characters artfully framed, with Marianne (Daisy Edgar-Jones) shot in softer focus and often backlit, to emphasise her fragility, while Connell (Paul Mescal) was regularly lit from the side to emphasise his strong features. Macdonald’s episodes were stronger on the key scenes and moved the plot more briskly (she is a veteran of Doctor Who). Of course, this difference was almost certainly down to the content of the episodes, as plot developments came more regularly later in the series, as well as some important location shifts, including Italy and Sweden. However, the fact that two of the MacDonald episodes came in at 25 minutes, while the rest were 30, would seem to bear out my observation, at least in part.

Anyway, the whole thing was totally enthralling and enjoyable throughout and would have been a must for my shortlist even in a normal year.

Last year, I noted in my blog of April 9th how much I had enjoyed the first season of Ricky Gervais’ After Life (Netflix) but reluctantly declined to shortlist it on the grounds that I felt it was not something which had particularly extended Gervais’ considerable

capabilities. I have no such qualms about the second season, which is in much the same vein, but which now looks like a fully settled sitcom. Characters who had existed mainly in the background of the narrative (and are played by some outstanding performers) were given greater weight this time around, so that it felt more like an ensemble piece. The melancholy feel was still there, but there were considerably more laughs – some sequences, most notably the climactic talent show, had me in tears of laughter. Paul Kaye’s psychiatrist was revealed as a distant cousin of The Office’s Finchy, while Ethan Lawrence as James is clearly the new James Corden (as if we needed one). I’m really pleased to add it to the shortlist. 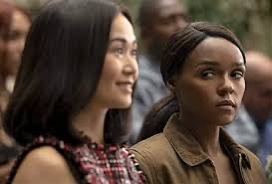 Also returning for a second series was one of my favourites of 2018: Homecoming (Amazon) continued the story of the first season, though without Julia Roberts. The structure was similar – a main character (Janelle Monae) who has forgotten her role in the Geist projects and spends the series trying to figure it out. It also continued the tradition of having a single directorial vision: this time Kyle Patrick Alvarez, taking over from Sam Esmail and doing a good solid job, though not quite as spectacularly. It was certainly a worthy successor to the brilliant first season, though not quite up to the same standard and, according to my usual practice in such circumstances, not one for the shortlist. 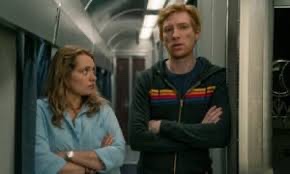 The main attraction of Run (Sky Atlantic) was its connection to Phoebe Waller-Bridge. It was created by her regular collaborator, Vicky Jones, and Waller-Bridge appears in a supporting acting role, as well as being Executive Producer. The premise is clever, the lead performers excellent and the pace frantic. There are a number of great plot twists and at times it comes across as a bit like a mini-Fargo, especially when a quirky female cop character is introduced. The ending was a disappointment in a Killing Eve sort of way, because it is so clearly set up for a second season, without being as conclusive or as satisfactory as the twisting plot required. I enjoyed it, but don’t think I’ll be back for more.

Currently, Michaela Coel’s I May Destroy You (BBC1, BBC i-Player) is looking like it may turn out to be something of real significance, but I am watching it as it is transmitted, so will return to it in a later blog. Meanwhile, The Salisbury Poisonings (BBC1) crept in under the wire – it was apparently shot before lockdown but edited and post produced under social distancing conditions. It is solidly made and performed and has a suitable gravitas, as well as a relevance to the pandemic, but there is not a great deal more to it than a dramatisation of the events of the time. If Run is a mini-Fargo, then The Salisbury Poisonings is a micro-Chernobyl.

As broadcasters have run short of new production, two new styles have emerged: existing programmes adapting to lockdown conditions (“normal” programmes done in a “new” way) and “new” forms of drama and comedy, made under lockdown conditions, the emergence of which I speculated on in my last blog.

To briefly consider the normal programmes, newly made: two entertainment programmes particularly rose to the challenge and actually improved a lot as they got used to the new production methods: Have I Got News for You (BBC1) seemed a bit lost 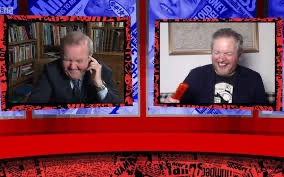 without its studio audience at first, but as it adapted, the standard of the humour rose. I have always contended that the true sign of whether something is funny is when you experience it without anybody else laughing and thus prompting your own laughter, and HIGNFY made me laugh out loud many times during its recent socially-distanced run – in particular, Paul Merton’s dry asides were more easily audible than usual. Later, on Friday evenings, The Graham Norton Show (BBC1) proved that it is Norton’s interviewing skills, rather than the interaction of his guests, which is the real secret of the show’s success. But my favourite adapted show of the lockdown has to be Match of the Day : Top 10 (BBC1). At first it seemed like a poor substitute for the real thing for we football-starved fans, but it developed into something very special in its own right. The wonderful rapport between Lineker, Wright and Shearer, even though contributing from their own homes, produced many brilliant moments and the unguarded candour of their conversations was a revelation. Ian Wright in particular was on great form throughout. It may have started as a podcast but seeing the three of them interacting so brilliantly made it great TV.

And in the last few weeks, “new” dramas and comedies have begun to emerge, made under lockdown restrictions. The best of them was also the first to appear. Isolation 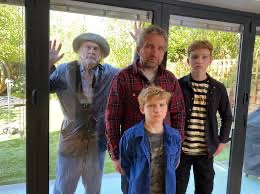 Stories (ITV) was shot in the homes of the actors involved, sometimes with members of the same acting families playing related characters (Robert and Tom Glenister as a father and son) or with family members acting as directors and camera operators under remote professional instruction (Eddie Marsan’s wife Janine – in real life a make-up artist). The fact that all four 15-minute dramas worked so well as drama, while at the same time illuminating aspects of lockdown, is mainly down to writer Jeff Pope, whose idea it was. It was certainly an innovative way of making drama, not least because so many union rules must have been broken. The practicalities of making the series were discussed in this BFI panel – normally, such a thing would have taken place onstage at BFI Southbank but is here necessarily and appropriately virtual:

The episodes of Isolation Stories struck me as being rather like mini-Inside No 9s – they used the same single location format, some of the themes were similar and there was the presence of Sheridan Smith. Now, if only Pemberton and Shearsmith were working on a No 9 lockdown special! Maybe they are, but in the meantime, Isolation Stories makes the shortlist for producing such good episodes in such difficult circumstances. 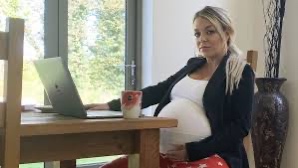 The BBC’s response, Unprecedented, also did a good job in the circumstances, though with less ambition. The episodes were of similar length but opted for mainly presenting the drama through computer screens and that is not even a new approach (the Stephen

Mangan series Hang-Ups did much the same a couple of years ago). Also, there was a more didactic and drama-doc feel about the series: the writers were often making points about the crisis rather than using it as a backdrop for the drama – a worthwhile thing to do, for sure, but not as satisfying as the real drama of Isolation Stories, from which similar points emerged without feeling forced.

Most recently, Staged (BBC1, i-Player) joined the ranks of the computer-screen genre and, though clearly set in lockdown, attempts to generate both character and comedy from the situation. Michael Sheen and David Tennant are playing themselves attempting to rehearse their postponed play in virtual space. Their banter is reminiscent of that between Steve Coogan and Rob Brydon in The Trip, but I’m not going to call It a mini-Trip (I’ve used that device enough in this blog) because it just doesn’t have the locations. It’s diverting enough, so far, and may develop into something more. 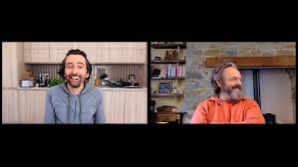 More comedy was to be found in Comedians at Home Alone (BBC2) which allowed some well-known comedians to contribute brief self-recorded segments from their homes. It was a good idea but, inevitably, the standard was uneven.

So far, most of the “new” forms I have seen have been “about” the lockdown rather than ordinary dramas or comedies, though the imminent re-makes of Alan Bennett’s Talking Heads will break that trend, but judging from the trailers, they will be much as the original versions, so nothing “new” there – just a great idea for the times. But if no really new forms have yet emerged, one point is still worth noting: all the programmes I have listed above were of 15 minutes’ duration. Will the most lasting effect of production under lockdown be that there will be more shorter programmes, or will things just revert to normal when it is “all over”? We shall see.

With less and less original production available, I have, of course, turned to my DVD and Blu-ray collection more and more of late. And I have finally taken the plunge and begun the marathon of watching The Sopranos from beginning to end. That will, no doubt, inform a future TV Catch-up blog. It’s going to take some time, but I have plenty at the moment. 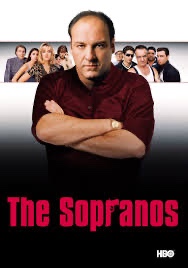