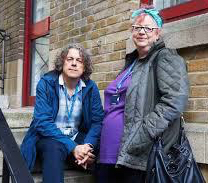 I usually put a basic descriptive working title on my blogs as I write them on Word and then try to replace them with something snappier for publication. In this case, I’m just going to keep the working title, because it somehow sounds right. So, this is about the two series named above.

In a blog back in December, I mentioned several series of 30-minute programmes which I said would be amongst my top 10 TV titles of this century and which, though they come from comedy, contain dramatic elements and realistic narratives which make them more like mini-dramas. My two favourites are Stefan Golaszewski’s Him & Her (BBC, 2010-13) and Getting On (BBC, 2009-12), co-created by Jo Brand. The most recent creations by both Golaszewski and Brand have just completed their respective second seasons and both go straight on to my running shortlist for the best of 2018. 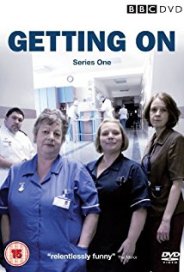 Mum (BBC2) doesn’t even run to 30 minutes now. Apart from the final episode, Golaszewski clearly thought that a 25-minute slot was enough to convey what he needed each time, and this season contained a number of extended contemplative scenes with minimal dialogue – the moment when Karl Johnson’s Reg was simply sitting and thinking about the loss of his son was a deft and necessary reminder of the background to the piece, even though the closing song is always there to reinforce the point that the key character is the one we never met. This has not only been a series where nothing has happened – nothing happening has been the point. All the characters have been in their own limbo for a second full year, as individuals as well as couples – Cathy and Michael still unable fully to understand or accept each one’s need for the other; Jason and Kelly constantly on the brink of moving to their own flat, though Jason clearly finds it

unbearably difficult to leave his mum, both because of the loss of his father and his own domestic needs – meals and washing – which Kelly seems very unlikely to provide for him; Derek and Pauline waiting for the latter’s divorce to be finalised and hiding their own desperate insecurities behind their rather pathetic public personas; and Maureen and Reg, usually in the background, Maureen asleep and Reg seemingly waiting for the moment he will lose his wife as well, all the time tenderly checking that she is still alive, in between swearing and complaining about everything else.

I must admit, that, after three or four episodes, I was beginning to wonder if Golaszewski had made a mistake in not advancing any kind of plot dynamic. Nothing happened in the first series of Him & Her either, but the second series gave a definite sense of dramatic development, albeit by stealth. Maybe the difference is that Pauline, obnoxious as she is, lacks the malevolent narrative-driving presence of Laura in Him & Her. I was also concerned that maybe, by assuming the directorial responsibility as well (Richard Laxton directed all four series of Him and Her and the first of Mum), Golaszewski had made it just that little bit too introspective. But I shouldn’t have worried. The final two episodes put the previous four into a different light and completed a magnificent whole, which I am already looking forward to revisiting. In the final ten minutes a combination of Michael’s impending move to Spain and Jason’s clumsy attempt to preserve his own memory of his father by warning Michael against “stealing his wife” prompts Cathy into a desperate declaration of love which stuns both Michael and us. In the penultimate episode we have already seen her give Michael an impromptu hug which doesn’t seem to have advanced matters, so there is no guarantee this will, either. When they tentatively link hands while watching fireworks on bonfire night in the final image of the series we are reminded that the first series ended in much the same way on New Year’s Eve the previous year.

So, it is perfectly possible, when the third season arrives, that nothing will have changed, but I trust Golaszewski to have something very special in store for us and, whatever does

or doesn’t happen, we are going to miss it when it’s gone. It really seems superfluous to note that the acting performances are out-of-this-world wonderful, but, equally, it would be an oversight to write a blog about Mum without mentioning just how fantastic Lesley Manville and Peter Mullan are, as are all the cast (and a special mention for Karl Johnson as Reg this time round). So much goes unspoken, but you are in no doubt what the characters are thinking and feeling. One other point about the third series – it will be interesting to see how the episodes are titled. So far, each episode has had the name of a month as its title (each season covering a year in the characters’ lives), but all 12 have been used up now.

Damned (Channel 4), by contrast, is jam-packed with incident. There is more narrative in the overheard phone conversations than in an entire season of Mum. It also represents the completion of the transformation of Jo Brand from stand-up, presenter and panel show regular to the finest female writer and comic actor we have – and, whereas that was once the late lamented Caroline Aherne’s title for the taking, there is now a great deal of competition from the likes of Sharon Horgan, Julia Davis, Phoebe Waller-Bridge, Michaela Coel and Diane Morgan. But Brand has now been (jointly) responsible for two of the finest series of the last two decades. I regard Getting On as one of the greatest TV achievements of the 21stcentury: it was written and performed by Brand, Joanna Scanlan and Vicki Pepperdine (and the first two series were directed by Peter Capaldi, no less) and I always assumed that each was mainly responsible for their own character (much of it was improvised, anyway), with Brand providing the background knowledge from her time as a psychiatric nurse, which gave it such a ring of authenticity.

I believe subsequent career trajectories have borne out my assumption that Brand was the leading creative force behind Getting On (which, incidentally, translated very well to the US version, made by HBO under the auspices of its creators). Scanlan and Pepperdine collaborated on the less-than-inspired Puppy Love (BBC4, 2014), before returning to their acting careers (Scanlan to great acclaim in Paul Abbot’s No Offence for Channel 4), while Brand moved her character of Nurse Kim Wilde on to a brief but highly memorable three-part series, Going Forward (BBC4, 2016). At the same time, she created Damned in collaboration with Morwenna Banks, firstly as a pilot for Sky’s Playhouse Presents, in 2014, which was then developed into a series for Channel 4, with the addition of Will Smith to the writing team, debuting in 2016.

Much as Getting On drew on Brand’s own experience of nursing, so Damned reflects her mother’s profession as a social worker in a children’s department. She seems to be playing a version of herself in all these series, but that is what makes it so effective and authentic. What is more, Damned is populated by brilliantly drawn characters, both the workplace regulars and the clients. Alan Davies, Kevin Eldon, Georgie Glen and Isy Suttie provide the sort of support you would expect from such reliable performers, but it is two of the other staff members whose roles are most striking: Himesh Patel as uptight ex-cop Nitin and Lolly Adefope as political jargon-spouting trainee Mimi. To cast minority actors in roles which seem mainly there to attract the derisive scorn of the veteran staff is a brave move, but one which works well, especially as both come good at the end of the second series and show a depth of character which is part of the success of the show. Nobody is a stereotype on Damned, and the writers deserve great credit for that. They also deserve enormous credit for producing a narrative and dialogue which delivers many laughs while also being shocking and provocative (sometimes all at the same time).

Not joining Mum and Damned on the 2018 shortlist, however, is Hold the Sunset (BBC1). I managed to watch it all and was mildly diverted by it, as anybody would be

watching John Cleese, Alison Steadman and Jason Watkins effortlessly investing substandard dialogue with the sort of comic potential it doesn’t deserve. The rest of the high-quality cast, including the aforementioned Joanna Scanlan and sitcom veteran Peter Egan, were largely wasted, though. And, unlike the other two shows, it was really trying to be funny.

As for recent new British dramas of a more traditional length, I also watched all of David Hare’s Collateral (BBC2) without being overly impressed, while I didn’t get beyond the first episode of Troy: Fall of a City (BBC1). Meanwhile, on Channel 4, Philip K. Dick’s Electric Dreams concluded its run with a couple of interesting stories but was inconsistent overall and no replacement for Black Mirror. However, I am currently gripped by one particularly impactful new drama, which I reckon is another certainty for the 2018 shortlist, but that will be for my next blog.