Withdrawal symptoms caused by the end of the World Cup are fading now – they were particularly acute this time because it was such a fantastic tournament, possibly the best ever – but this blog will consider the television coverage, and indeed the television involvement, rather than the football itself.

Most world cups bring some kind of advances in coverage, both in terms of the domestic presentation and the coverage of the matches by the host broadcaster. The first time I watched it was the annus mirabilis 1966, when the big advance was the introduction of the instant replay (it is now almost impossible to imagine football on TV without it). 1970 brought both colour and (on ITV) the first panel of pundits, though then they were back home in the studio rather than in an exotic location like Copacabana Beach or Red Square. Many of the subsequent changes to the organisation of the games have been 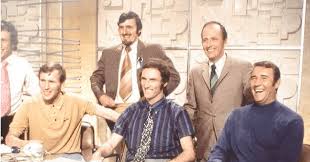 made with television coverage in mind – the red and yellow cards for instance, which clarified refereeing decisions, or the simultaneous playing of final group games, introduced to avoid teams playing out boring draws which would see both go through, but which now provide some nail-biting coverage, particularly at this most recent tournament (the final group games involving Argentina, Germany and Japan were all riveting for different reasons).

The big innovation of this tournament, of course, was the much-trumpeted video assistant referee (VAR) system. Truly, this was the moment when television coverage of the event could have become part of the event itself, if that was ever going to happen. There are plenty of reasons why that should NOT happen of course – TV has always needed to be separate from the action of any sporting event to cover it objectively – but the moment of review is where they should come together. Basically, we the viewers need to know that the referee is seeing the same replays as the television coverage is giving us – or to know precisely which pictures the referee is using to make his decision. That was very far from clear in many cases and, of course, we also have the commentators giving their own judgements, so that when the decision goes the other way (as it often did) confusion and outrage can result. At least we should be able to hear the conversation between the VAR referees and the on-field referee, or to hear the VAR officials’ conversation, as sometimes happens when an umpiring decision is reviewed in cricket. 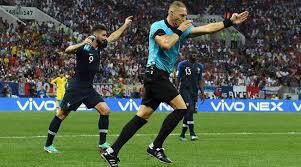 I think it’s clear that VAR resulted in far too many penalties, many of them crucial (especially the one in the final, which was very dodgy) and the reason is that the referee’s discretion has been removed. So many times, you hear commentators dismiss penalty appeals with the words “I’ve seen them given”, indicating that technically they may be penalties, but one wasn’t deserved in this case. Well, now they ARE being given and it is spoiling games. The other main use of VAR – for offsides being looked at retrospectively – is working better, though the commentators seemed to forget about it and were constantly criticising the linos for being too slow to raise their flags. The other thing they constantly mentioned was that the main point of it is to correct obvious mistakes, like Frank Lampard’s “goal” against Germany – but the goal-line technology already does that and works well because it is a matter of fact rather than interpretation. Penalties should always be down to interpretation, but VAR puts too much pressure on referees to reconsider reasonable initial thoughts in the light of “facts”. The whole question of the use of video replay for decision making in football is very much a work in progress and is a long way from getting it right.

But, for me, the worst aspect of the system is the loss of the excitement of the moment – the joy of a goal being scored which can be restrained by the possibility it may have to go to review. This has already happened in cricket. One of my all-time favourite cricket moments on TV was the end of the 2005 Ashes test at Edgbaston – a nail-biter, which England won by just 2 runs, the narrowest margin in Ashes history. When the final wicket fell – confirmed by the umpire’s finger – my explosion of joy was unconfined. The 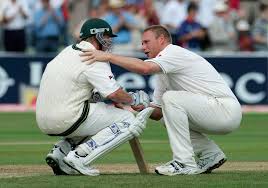 coverage on Channel 4 rose to the moment – unforgettable shots of Michael Vaughan and the England players celebrating, intercut with Andrew Flintoff’s sporting gesture to console Brett Lee, who had batted so well. None of that would be possible now – the umpire’s decision would be reviewed (and that particular decision was a debatable one – the pressure on the review team would have been enormous). Something has definitely been lost and the drama of the review does not compensate for it.

One strange aspect of this World Cup for me was that the end of the group stage and the first knockout round coincided with our family holiday in Montenegro, so I watched that section of it on RTCG with a commentary I could not fully understand (though you would have thought I might have learned the language after 21 years married to a native speaker – shame on me for that). This brought home to me that the commentary is not really there primarily to give factual information, or even to interpret the game for you, though that is important. Its main function is to replicate the sort of chat that would take place around you if you were actually at the game.  Mind you, I found I missed the studio analysis even more and found myself wondering what the panel might be saying back home after the penalties win over Colombia. Having shouted “Eng-er-lund!” from our balcony at the Columbia-supporting locals in the beachside bar below, I was left feeling a bit lost.

As for the British TV coverage, as usual I found the BBC’s the best and they put together a number of particularly excellent nostalgic compilations of archival material this year. Of course, the “curse of ITV”, having been seemingly banished in the first knockout round, returned with a vengeance for the semi-final. But England’s defeat did not bring the usual sense of anti-climax and the final was a worthy ending, though the chaos of the presentation of the trophy, including the TV direction, was not.

Anyway, just a week to go now before domestic footie returns for the new season (two if you support a Premier League club). Match of the Day will be back, Gary will be promising us an unmissable show every week and everything will be as it should be -with no VAR, at least until they have worked out how it should be used.