Well, it was a wonderful TV year overall, that’s for sure, but, as I speculated in my blog of 17th July (A Year of Two Halves?), the second six months could not hope to compete with the astonishing quality of the first. January to June produced fifteen titles for my shortlist, but I have only so far added a further two in the months since, both of them from streaming platforms (and both Netflix), which seem to release their best stuff in the run up to Christmas. Maybe the broadcasters have decided not to compete with this strategy, preferring instead to fill their schedules with an over-abundance of Reality TV at this time of the year.

Anyway, I can certainly add a third more recent title, with another streaming service (Amazon this time) having only just finished giving us one of the unmissable gems of the year – the final season of Sam Esmail’s Mr Robot. This has been a consistently wonderful series and received the concluding season and finale it deserved. I was particularly struck by Esmail’s use of a device very similar to that which illuminated the year’s 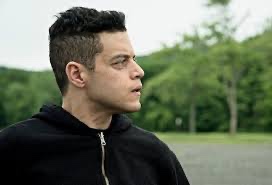 earliest masterpiece, Fleabag – whereby the central character’s fourth-wall-breaking habits (Fleabag’s looks to camera, Elliot’s narration) are challenged by another character (Fleabag’s love interest and Elliot’s doppelganger respectively) to unsettling effect. Indeed, the finale of Mr Robot was all about making us, the audience, complicit in the action. “Is this real” was the question constantly being asked by both the characters and ourselves and the only reliable answer must be “of course not – it’s a TV series”. At the end it didn’t matter how much of what we had seen had been a construct of Eliot’s mind, because it was wildly entertaining and engaging – just as a great TV series should be. I liked the nod to 2001: A Space Odyssey, too. Not just one of the year’s best, but one of the decade’s (and I’ll be back to that).

So, I have ended up with a top 18 this year, from which I have chosen the following top ten of 2019 (as usual, in rough order of their appearance and you will notice that 8 of them are from the first half of the year):

Just the two series and it’s all over, but the true genius knows when to call it a day and it went out on the highest of highs.

Janet Baker in Her Own Words (BBC4)

A brilliantly constructed and presented documentary on a subject that is very raw and controversial – so much so that it is still to be seen in the USA, where it was jointly commissioned.

Another perfect piece which paced itself carefully towards a satisfying and emotional climax in its third series.

Hard to accept that this may be the last time we meet the characters whose lives we have followed since they were seven. Keep going, Michael Apted – we need them back in 2026. 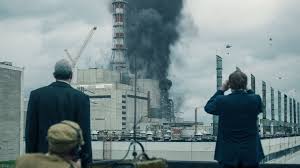 Hugely impressive, riveting and illuminating telling of the story of a nuclear disaster which could have been an international catastrophe. 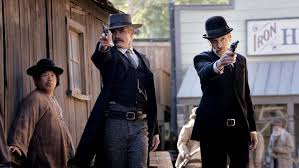 We thought this would be one of the great unfinished series, but David Milch managed to provide the perfect finale just in time.

Searing and mesmerising three-parter from Meadows, Thorne and Graham – the most intense television of the year.

A very welcome return for Ronan Bennett’s’ urban epic, this time given the space to grow into something even more arresting

Happy New Year everybody! I’ll be back early in the new one with my list of the best of the decade.

Well, I promised that 63 Up (ITV) would form part of my next blog, so here we go. I also named it as a certainty for my running shortlist before I had seen a minute of it because of what it has been, which is an essential part of what it is now. It had already earned its place on my list, even though this edition did turn out to be a little less impactful than previous ones. It had a certain valedictory air, which may be because Michael Apted’s own advancing age makes him question whether he will be around to do it again in

another seven years’ time. Each participant was asked to comment on the original premise of the series – that a person’s character and life path is set at the age of seven – which gave an air of things being wrapped up, at least in the event that there is to be no more. Hopefully this will turn out to be a “just in case” precaution, but I think Apted needs to work out a way of letting it go on without him, because it is too important to let go until the last possible moment. It certainly wouldn’t be the same without Apted’s skill as a film-maker and as an interviewer, but maybe there could be just a small-scale studio get-together every seven years when he’s no longer around.

It also struck me that there seemed to be a lot more questions about the participants’ views of political events this time around – in particular, Apted was keen to ask many of them about their attitudes to Brexit. Given that several of them have moved abroad or have family or business connections overseas, while others see themselves as firmly British, this was a fruitful line of enquiry. It also spoke to questions of identity, which have characterised the series throughout.

Overall, the series has perhaps become a little predictable now. Tony’s story usually comes first, to hook you in, while Neil’s is last, to keep you watching to the end. The first death in the group, that of Lynn, was very well handled at the end of the middle part, 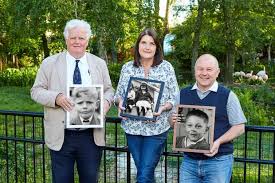 while the grave illness of Nick was also saddening, but otherwise it seemed to be business as usual, though with less to report. The series has mirrored my own life throughout (I was eleven when it started) and “less to report” is pretty much where I am now, too – that’s the main condition of retirement. Coming back every seven years has also worked particularly well with people of this vintage, especially as it only became clear that would happen gradually – with the impact of social media, it wouldn’t be the same for people of later generations, because their lives would be too obviously impacted by their fame. That has happened a little bit in the Up series, but not enough to affect its trajectory.

Up is pretty reliable when it comes to the credibility of its participants’ testimony. This may be because it involves “ordinary people” who are not considering their own place in history or attempting to remember more than seven years ago. There have, however, been a number of recent documentaries I would like to mention here, which have relied on the memories of more famous people or have demonstrated how they can be distorted, in one case even deliberately.

Going back a couple of months, one of my very favourite documentaries of this year has to be John Bridcut’s Janet Baker: in her own words (BBC4) a wonderful and poignant portrait of one of this country’s greatest ever singers. Baker retired (suddenly) 30 years ago and is now 85 but comes across as incredibly lucid and eloquent as she looks directly into Bridcut’s camera and recalls her glory days. She is, of course, aided by a tremendous catalogue of recordings, both sound and vision. Her core repertoire, as well as the details of her life (she has been caring for her disabled husband for many years) makes the

overall impression very emotional and wistful. Bridcut has a tremendous capacity for filming people simply listening to music which speaks volumes without a word being uttered (he did much the same in his documentary on Herbert von Karajan a few years back). This is a documentary which speaks to me as directly as the Up series – I have most of the Baker recordings featured on my shelves and my years of discovering classical music coincided with Baker at her peak. It is one most definitely for the shortlist.

The five-part Thatcher: A Very British Revolution (BBC2), on the other hand, was a recent history told at a distance but by people with their own place in it to cement. Mind you, as John Nott pointed out at the start, not many of Thatcher’s first cabinet are left. There were three main witnesses, interviewed at length: Norman Tebbit, Bernard Ingham and Michael Heseltine (John Major was strangely absent) and, although they all had interesting stories to tell, they also all had their own spin to apply to them. There were some obvious parallels for today, especially with a Tory leadership campaign going on and Europe still dividing the party. Ingham’s incredulous “who would want to lead a

Tory government?” was a highlight. There was also some great archival material, including Norman Tebbit’s rescue from the Brighton bomb which was broadcast live on BBC Breakfast Time and has, for a long time, remained un-repeated at his request. I remember watching it at the time and thinking what a striking piece of television it was – the stricken Tebbit, covered in dust and wearing only barely in-place pyjama bottoms, being slowly lowered from the rubble by many hands – a scene resembling Renaissance depictions of Christ’s descent from the cross. The series contained a number of such resonant sequences but, as a whole, contained very little which we didn’t know or which had not been covered in previous series.

Even further along the scale, Martin Scorsese’s Rolling Thunder Revue: A Bob Dylan Story (Netflix) is deliberately fictionalised documentary making, maybe recognising that attempting to present any sort of “truth” about this subject matter was both impossible

and probably less fun. Dylan himself is certainly in on the joke and it may well have been his idea. But what the hell, it captures a time and a mood and gives us some fantastic concert footage. It is often said in relation to drama documentaries that they aim to present a “higher truth” when they do not necessarily stick to verifiable facts, and I guess that also applies when what is ostensibly a documentary contains “mockumentary” elements. Whatever, I certainly enjoyed it, but I don’t think it is in the same league as the same director’s No Direction Home (PBS, 2005)

Much more recent history was presented in Olly Lambert’s One Day in Gaza (BBC2) transmitted exactly one year after the events it depicts (except in America, where the usually estimable PBS series Frontline shamefully pulled it just before transmission and has yet to re-schedule it). This is a case where there is plenty of evidential footage but also many different “truths” about what happened. Lambert’s doc was very well constructed, with just the right balance of actuality and context. Some of that actuality was remarkably vivid and the drone footage gave it an epic feel. The slow reveals in the interviews (the mother clutching her dead son’s vest, the activist who had lost a leg) personalised the individual experiences of a chaotic situation. Olly Lambert has made a number of films in and about Gaza and obviously has good contacts and made great choices. As for its value as a piece of history, only time will tell, but for the present it is one of the best windows on the Israel/Palestine situation and a must for my shortlist. 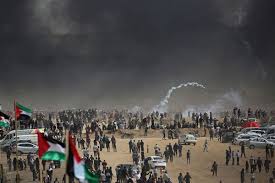 And that shortlist is growing long. It’s been a wonderful year so far. Next time I will update the list for my usual halfway report.